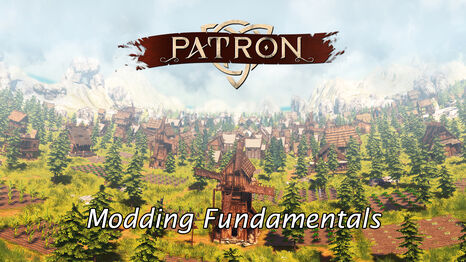 The best time to go through this article is before working on any mod. It's important to understand how Patron handles mods, especially in situations where many mods from different creators are used at the same time. And this last noted bit is the key: handling mods from different creators that modify the same aspects of the game. That topic is covered more in the Database tables articles, though so let's start at the beginning: one mod, made by yourself.

A whole lot can be modified or added to Patron, so answering this question is very difficult. It really depends on what you plan on modifying. Let's have a look at a few examples:

You likely noticed the same application is mentioned in all the examples. That's because importing and using almost anything in Patron, eventually leads to editing game files (database tables, definition files...). This can be done with the basic Windows Notepad (any simple text editor will do actually), but we advise using Notepad++.

You might ask OK. Interesting. But why is that important?. This is the thing: the mod's folder structure should mimic that of the default game. This is by far the best possible practice, just in case some things are expected by the game to be in certain sub-folders. Let's take any database table as an example. The game knows it can find the Buildings.wdt in the Data\Base folder. If you want the game to use a different database table, you have to mimic that by creating Buildings.wdt in the Mods\NewMod\Data\Base folder.

This section will be short, because this can encompass a massive amount of widely different topics. Search for more specific tutorials or contact us directly if you have questions regarding modding something specific.

For the sake of this tutorial, let's imagine we've added a new building called Watchtower (how creative...). This would require a new folder containing the building in Mods\NewMod\Data\Models\Buildings and a new entry in the Mods\NewMod\Data\Base\Buildings.wdt database table.

A good practice is to automatically create the Data folder inside your mod folder (Mods\NewMod\Data). You'll need it anyway, so you might as well do it right away.

Editing databases and the principles of dynamic databases are explained in another tutorial and please do take the time to read and understand it. It's crucial for making mods work properly with one-another and with the game.

So we've got the modded files and everything. Now what? Now is the time to package it all up into a nice little single archive that can be easily shared.

The packaging is done through the Mod Manager located in the Installation Folder , but there is one more file you need to create for the packer to know what to do.

The mod definition file, .sgwm. For now, you'll need to create this file manually (Notepad++)... and note the extension!

The mod definition file MUST be placed in the InstallationFolder\Mods folder and nowhere else, otherwise the game won't register the mod.

Here's an overview of a few things to be mindful of when creating the definition file:

The purpose of Name, Author and Description should be self-evident (just be careful with the empty spaces and the tabs separating the parameter name from its value!), but what about the Picture? That is used by the Mod Manager. Once again, it is advisable to simply duplicate the template image and use that to determine the correct size. The picture size we recommend to get the best outcome is 1280x720 px, .jpg format. Although any ratio will work, the default is 16:9.

This image is also used on Steam Workshop, if you decide to publish the mod there. A template definition file and mod folder is supplied with the game by default. Duplicating that as the starting point for a new mod is advised.

Great! That is set, so let's move onto the packaging itself.

You'll usually be creating a new archive, meaning you'll likely select the .sgwm file, but in case you just want to do some other action through the Mod Manager (like unpack a mod archive you took from your friend) then you'll select the archive file (.sgwma). Unpacking mods is also done automatically by the Game Launcher when you set a packed-up mod as active.

That .sgwma file is the complete mod, rounded up into a nice single-file package, together with the mod picture and the definition file. The game uses the unpacked version of the mod, but sharing a single file is simply easier.

Now that you've got your mod all packed as .sgwma and ready to go, the method of sharing is basically on you. We place no restrictions on this. The Mod Manager can share the mod directly onto Steam Workshop, but you can just as easily take the NewMod.sgwma to your friend on a USB stick, or upload it to some other repository.

Use the GameLauncher -> Mods window to set the desired mods as active (the checkbox on the left of the mod name in the list).

When a mod is set to active, the launcher unpacks it so it's ready for use in-game (if it wasn't unpacked already). To deactivate a mod, simply toggle the active flag off. Deactivating a mod does NOT delete the unpacked mod folder!

Creating mods can be daunting, but we encourage you to try. Start with something small, simple, maybe change some text and see how things work how they fit together. If you're serious about modding, please read the Database tables article. It is vital to understand how these work.